skip to main | skip to sidebar

Visit the Random House Australia Website for a Free sample chapter of my second novel in the Jay Ryan series, DEADLY TRUST.

Release date 02 August 2010 in Trade Paperback and e-book in Australia and New Zealand. 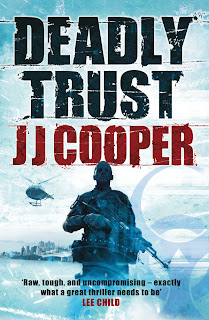 Deadly Trust is my latest thriller and will be released in August 2010.

Former army interrogator Jay Ryan is enjoying the quiet life after leaving the military far behind - or so he thinks. Because old habits die hard and he's quickly thrust back into the thick of things when a disgruntled scientist, backed by the Australian security industry, develops a weapon of mass destruction - a hybrid strain of Anthrax - to be used to create panic in a population apathetic to crime prevention.

Only one batch of Anthrax inoculations can resist the deadly new strain, and it was given to five military interrogators. One of them was Jay Ryan. When the other four disappear, Ryan is the last interrogator left with the antibodies to defeat the deadly Anthrax strain.

Racing against time and hunted by rogue soldiers, mad scientists and an organisation that operates beyond the law, Ryan digs deep into his past for a chance at a future.

In this heartstopping thriller, Jay Ryan wages a one-man war against enemies both known and unseen. There's only person he can trust - or can he? Winning the war may have devastating consequences for the last interrogator …

New Review for The Interrogator

Thought I'd share a new review for my first book The Interrogator - http://www.ourbrisbane.com/shopping/the-interrogator-reviewed

The Interrogator builds a terrifying realism, displaying all the elements of the classic military thriller - a lot of blood and gore, mysterious and reprehensible undertakings, action aplenty, a touch of romance, intrigue, conspiracy, sexual tension, trickery and betrayal, which ultimately leads to a battle royal between good and evil.

Essential and fundamental elements, from the very beginning to the very end, underpin this military thriller. The ability of the central character to absorb limitless physical pummelling and just get up and get on with it is an unspoken given in the military thriller genre. An assortment of conspiracies make the stakes constantly high proving that the biggest enemy is often a lot closer than you may realise. The one man against the entire conspiracy concept gives you your lone wolf, as with all thrillers.

The main character, Jay, has a dark past and a tortured soul; he is also the keeper of secrets which are kept very well throughout the novel.

Debut author JJ Cooper is a former member of the Australian Army Intelligence Corps, which creates a very authentic feel to the characters and situations in his novel.

Cooper keeps the stakes high by creating many twists and turns and the reader must be able to keep up with each of them to keep track of what is going on. Cooper really does know his subject matter, from body language through to specific phrases and how his characters react under interrogation and this really helps to build a credible plot.

Sydney Newspaper Reviews for The Interrogator

The Interrogator has been reviewed in a couple of Sydney Newspapers last week.

At last Australia has an action hero we can proudly call our own – Jay Ryan.

Ryan is the protagonist of JJ Cooper’s The Interrogator, an accomplished debut thriller about an Australian soldier whose life is turned upside down by a betrayal from within.

A solid page-turner, it’s a Godsend for commuters looking for the ideal travelling companion. In fact it’s so ideal I almost missed my train stop a couple of times while I was reading it.

Cooper draws heavily on his 17 years’ worth of Australian Army experience as a real-life interrogator to flesh out Ryan’s character.

When we meet Jay, he’s having a bad day. Sadly for him, it’s about to get much, much worse. He’s kidnapped, beaten up, blackmailed, threatened, and tortured – and that’s just in the first few pages.

It’s occasionally hard to separate the good guys from the bad in this racy read that’s full of surprises – to say more is to give too much away – and Cooper does an excellent job of keeping the reader riveted to the page.

The Interrogator sets the scene for an inspired series that would translate well to the small screen, if not the big one.

This book begins with a bang, literally, heads straight to a nasty interrogation, then never lets the reader go. Jay Ryan is a specialist interrogator who must fulfil a mission for a shady organisation. Cooper's debut novel contains some amazing action sequences and some interesting detail drawn from his own experience as an interrogator in Iraq and Afghanistan. Despite a not entirely satisfactory denouement, readers are in for a ride as they hurtle toward a thrilling climax.
The Daily Telegraph 03/10/09
Posted by JJ Cooper at 3:28 am 5 comments:

I'm very fortunate to have been asked to be part of the Queensland Writers Centre (QWC) Blog Tour Oct – Dec 09.

The wonderful team at QWC would like to know the following of me:

Where do your words come from?

Experience and imagination. I suppose being an ex-interrogator adds a level of 'authenticity' to my thrillers. Imagination comes into it when I turn my previous life into fiction. Almost all of the interrogators I know are great storytellers - comes in handy for the job. So, although I don't have any advance creative writing courses under my belt, my previous career has certainly helped. Generally, I have a concept for the story and just write. Seems to be working OK so far.

Where did you grow up and where do you live now?

Started out on the north side of Brisbane and that's where I've come to settle now. I've spent plenty of time in other locations during my military career, but there's really no place like home.

What’s the first sentence/line of your latest work?

This is from book two which is about to hit the editing stage with my publisher (so may change). For clarity, I'm gonna cheat and give you the second line as well.

Sixty-four thousand years ago last Monday the final dinosaur succumbed to the ‘extinction’ vogue. Jay Ryan theorised that his legacy continued though through the idiosyncrasies of the habitually annoying employees of Byron Bay’s Road Transport Authority.

What piece of writing do you wish you had written?

I'm always dreaming along these lines so here's a few - Thomas Harris 'Hannibal', Michael Connelly 'Harry Bosch series', Lee Child 'Jack Reacher series', Robert Ludlum 'Bourne series', and I would love to have had my name on the cover of The Da Vinci Code (and the royalty statements).

What are you currently working towards?

Book two is completed and handed into the publisher. Now I'll work on book three to continue the Jay Ryan series.

Complete this sentence… the future of the book is… in the hands of our very talented Aussie authors.

JJ Cooper
JJ Cooper spent seventeen years in the Australian Army, deploying on two tours of duty in East Timor and one tour to the Middle East in 2003. He specialised in Human Intelligence, including interrogation (as a practitioner and instructor). Since leaving the military, he spends every spare moment on his passion for writing. JJ's debut thriller, THE INTERROGATOR, was published by Random House Australia in August 2009. His second novel in the Jay Ryan series DEADLY TRUST, was published by Random House Australia in August 2010. Official Website - www.jjcooperauthor.com